Keira’s last single friend just got married, leaving her roommate-less. When Rory shows up at her door for an interview, she’s more than a little surprised to find out that a guy has answered her ad.

Living with a man wasn’t exactly what she had in mind. But when all the other applicants don’t seem to be a good fit, she can’t help but let her mind wander back to Rory. Maybe he’s exactly the kind of roommate she needs.

Rory doesn’t do relationships. He’s been burned before. He hasn’t had anything more than a one night stand in a long time. And he’s good at what he does. He’s charming, confident, and completely off limits.

Keira can’t get her mind off of him. Will she be able to learn how to play a player? Or will she be the one that ends up getting played?

I don’t know how to describe Playing a Player. I am not sure how this book managed to get five stars from people. I have highlighted and made notes in the margins and I was not yet halfway, yet I have so many problems. I don’t normally review books by using quotes but I just couldn’t pass this up.

As I was writing this review, I realized I had a lot to say and could break it down piece by piece because it wasn’t just one thing or a few things, it was everything I had problems with.

Keira’s last roommate got engaged and up and left her in a rut looking for a new roommate. She has about 10 candidates, most women and one man, Rory that she mistakenly thinks is a woman (understandable). She has an instant attraction to him, also understandable, he’s hot. What I don’t get is deciding to agree for him to rent out the room. Why would you agree to rent out from someone you are attracted too???

Her best friend Emily tells her this is a really bad idea, Emily is the voice of reason throughout the whole book; the sane one, the one that makes me believe that the author does know what normal people reactions are to situations, despite the extremely questionable thought processes of Keira.

Keira decides to not heed the advice of a rational human being and allows Rory to be her roommate after they make a pact not to become attracted to each other or change things in any way, strictly roommates.

Now, from what I gathered, Keira’s personality is neurotic meets awkward and in turn shy which is showcased by the simple fact that she is a freelance writer who works from home because something to do with people. When she’s around men she’s attracted to she rambles and weird LIES come out of her mouth, and it’s not the cute verbal diarrhea, it’s the please stop talking this is extremely painful an you’re a LIAR verbal diarrhea. The lies drove me insane.

So Keira is a writer and decide to write about “Falling for a Player” which her editor promptly vetoed because it wasn’t sexy enough. Then she pitched the, “How to Play a Player” shtick.

Please keep in mind some of these things she did before she started writing this article which means she was messed in the head way before the pressure of a deadline (which I will try to point out while quoting).

After getting Rory’s advice of how to get a guys attention, she buys a dress that screams ‘whore’ something she would never wear and then goes into his room sits on his bed and tries to entice him. This was just before the start of the house-warming party he was throwing, meaning he is NEW to the apartment, no sexual tension from both parties just yet, just her, in her head, being batshit crazy. This was painful to read because she was so awkward and desperate.

Her friend Emily suggests she meet someone the day of the party and invite him because, you know she rambled and lied and said she had a guy at work that she wanted to invite, despite working from home being a freelance writer and all. What does she do?

She literally, on purpose bumps into this stranger, invites him to the party, and when he tries to ask if this a date, she mumbles something and runs away…spoiler….the guy she invited, Patrick is gay…I think that’s what he was trying to tell her. But, wait a minute, who would go to a stranger’s house for a party? You’re not teenagers, you’re adults.

She uses Rory’s advice on how to show a guy your interested in on him and its very painful to read about, she ends up sleeping with him that same night after assuring him that this will be a one night stand. What does a writer do with unrequited love? Why, she writes about it of course, she wrote about falling for the player and when her editor nixes that idea she pitches “How to Play a Player”

Keira does everything from eating a banana (sexually) and then sucking him to prepare for her date later that night, to stepping in the shower with him, because you know, we all shower with our friends. The only remotely normal things she did were to pretend that she wasn’t interested in him anymore, pretend to go on a fake date, pretend to befriend his next one night stand, to being his wingman him.

Yet somehow after all this they end up together after going to a wedding where he tells everyone they are everything but together, have sex in a coat closet and then end up madly in love.

The end. Seriously that was it, it ended just like that.

Last Line: At the end of the day, happiness was the only thing that mattered. 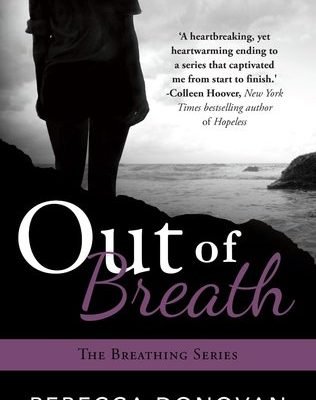 REVIEW: Out of Breath